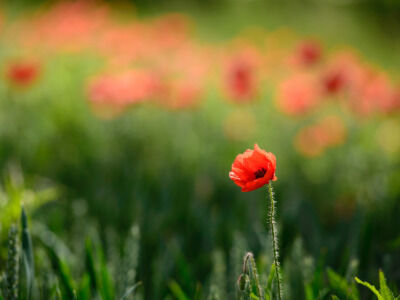 Depth of field (DOF) relates to the zone of acceptable focus within an image. Knowing how to control DOF is an essential photographic skill. Here we offer some advice on the subject.

Technique
o Aperture, lens focal length and focus distance all play a part in determining DOF.
o The aperture (or f/stop) is the camera’s iris and controls the amount of light reaching the sensor as well as having a significant effect on DOF.
> Small aperture (large f/numbers) give extensive DOF
> Large apertures (small f/numbers) give narrow DOF.
o Wide angle lenses (or settings on a zoom lens) give more extensive DOF and telephoto lenses give narrower DOF.
o Focusing on close subjects gives narrower DOF than focusing on more distant objects.

Creative use of DOF
o Extensive DOF is most often used in landscape photography, where front-to-back sharpness is ideal.
o Narrow depth of field helps to draw the viewer’s attention to a single point of interest – in sharp focus amid an otherwise blurred foreground/background.
o Control of DOF is important in portraiture – use a relatively wide aperture and focus on the eyes (or the nearest eye if not shot straight–on).
o Macro lenses allow very close focusing and a small aperture is generally needed to give a workable DOF (which might still be quite narrow).
o Narrow DOF is often also used in food photography.
o Try using the hyperfocal distance when shooting landscapes. Select a relatively small aperture (e.g. f/11-f/16) and focus about a third of the way into the scene. This will give you the most extensive front to back sharpness. If you focus at infinity, you lose some of the potential sharpness beyond the horizon. Check the zone of sharpness by zooming in to the image on the LCD screen and, if necessary, reshoot after adjusting the point of focus.
Next
Previous